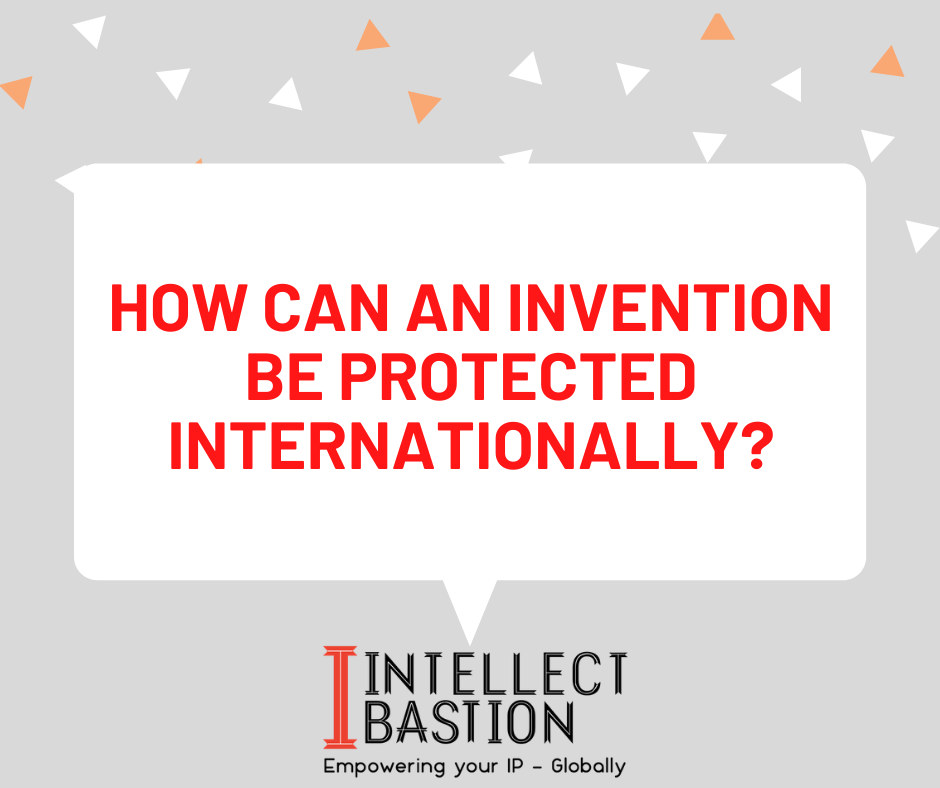 Then let’s discuss how this can be done in a few basic steps. The main baseline that creates our topic for the day is that patents are territorial rights. That means that if an inventor patents an invention in India, then he has the rights to create a business from that patented invention without any fear of being infringed in India only. He cannot stop anyone outside India who may intentionally or unintentionally use his invention in some other country to create economic benefits. In order to stop anyone using your invention outside India to create their own economic benefits, an inventor needs to have a patent for the same invention in those countries.

In our previous blog post, focused on “How to convert an Idea into Patent“, we discussed some of the basic points an inventor should keep in mind before going to a Patent Attorney to file a patent application. Now, to file an international patent application, the following are the ways that an inventor may adopt depending on his interest, budget, and requirement:

1.    The traditional way as per the Paris Convention

Paris convention is an international treaty that allows inventors to file a first patent application in their home country. And within 12 months period from the priority date, inventors are further allowed to file the same or almost the same application in the other desired countries individually.

This process of protecting the invention internationally is suitable if an inventor wants to protect the invention in just a few countries where his potential market lies and he is confidently aware of those countries as well. Also, the inventor must also have finances to bear the investment involved in filing patent applications individually in each of the desired countries.

However, there are several practical problems that an inventor may face while pursuing with this traditional way of filing:

a)     Lesser Time to make decisions: Inventor has only 12 months’ time from the priority date (The priority date is the very first filing date of a patent application) to make a decision on the list of countries in which he wants to have protection.

b)      Increased workload: Inventor has to manage the extra workload of doing all the procedural steps from filing to granting of the invention in all the desired countries. Hence, for let’s say there are 10 countries in which the inventor wants to protect his invention, his workload to carry out that process becomes 10 times.

c)      Increased Investment: Professional fees involved in doing all the steps in all the countries of your interest like replying to objections, request for examination, translating the patent application into different languages, and ultimately the professional charges of the patent agents/attorneys involved at different patent offices to get your work done as per the patent laws of different countries involve a huge amount to be invested in one go, since all this initiates almost simultaneously within a duration of 12 months from the priority date.

Hence, this route of filing an international patent application is fine for inventors having sufficient budgets, clear vision regarding their target markets, and just 3-4 desired countries of interest.

Well, if you are a solo inventor, start-up, MSME, or a university student, who is already engaged in his daily workloads. You may find it difficult to opt for the traditional route of international filing because of small budgets, indecisiveness in relation to geographical strategy, and a desire to have some more time to analyze the quality/market applicability of your invention and the potential countries. After having worked with many such clients at Intellect Bastion, we are confident enough to say that Patent Corporation Treaty (PCT) has proven to be a very simple, cost-effective and unified mode of filing international patent applications.

Patent Corporation treaty (PCT) is administered by the World Intellectual property Organization (WIPO). PCT enables the inventors to file a single economical and simple application for international protection for their invention. Moreover, the treaty provides an International search report and International examination report as well that further simplifies the task of national phase filing in the respective countries of interest. Here, National phase filing refers to applications filed in different countries of interest for obtaining grant of patent simultaneously based on the already filed PCT application, which is supposed to be done within a duration of 31 months from the priority date.

Before I discuss a few basic things to know in relation to PCT, let us know the list of benefits that an inventor gets upon choosing PCT mode of international protection of their inventions:

a)  PCT provides a simple and cost-effective way of filing patent applications internationally. The form is simple and the fee is economical. Moreover, for developing countries like India, a 90% fee reduction is provided if the inventor files as a solo-inventor.

c)      PCT provides a long duration of 30-31 months from the filing date to enter national phase filing. Thus, instead of having just a twelve-month time period within which an inventor must file foreign applications, with PCT, the inventor can gain an additional eighteen months period before having to incur the relatively large expenses of completing the national phase applications at individual patent offices. These expenses include the fee of translating the International Application into the official languages of the designated IP offices, paying the requisite official fees, etc. These additional months can be crucial to the exploitation of an invention. They may give the inventor additional time to raise the funds required to file patent applications in a large number of countries, or provide additional time to gage the economic importance of the invention or to find licensees or even partners in the enterprise, and also make decisions in relation to the countries in which he requires protection.

d)      It provides an international search report generated by the International Search Authority in order to assist inventors in improving its application by making suitable amendments. A formal examination report is also provided upon request by the International Preliminary Examination Authority administered by PCT that further reduces the objections that may arise while pursuing national phase filing. In this way, almost 70% of the workload is completed just by filing a single PCT application that provides a single searching and examination report to test the quality of your invention. Upon, National Phase filing, individual Countries refer these reports only to make a decision in relation to the grant of the patent in their respective jurisdictions. Henceforth, one major advantage an inventor gains through the reports provided by PCT authorities is the capability to in advance decide the quality and market value of their patent before paying huge amounts getting patents in individual countries.

e)      PCT provides centralized international publication of your international patent application on PatentScope, such that even if you don’t get a patent granted on such published application, the contributed publication gets enlisted under the category of prior arts and no one else is able to patent the same invention.

Although PCT applications can be filed directly at the International Bureau (IB), the most adopted and preferred way of getting international protection is to first file the application in your own country’s patent office. Within 12 months, the inventor can file a single PCT application to extend the duration of 12 months from the priority date to 30-31 months from the priority date. Within this duration, inventor can make important decisions in relation to the countries of interest, investments, and market value/quality of the patent. Upon making such decisions, the inventor can either decide to further process the application for the National phase filing in the desired countries or can decide to withdraw the application before investing the price involved in national phase filing procedures in individual countries.

However, there are some important facts that an inventor must know before choosing a PCT mode of international patent filing. Firstly, the benefits an inventor can avail by filing an international application through PCT mode are applicable to only the member countries of the Patent Corporation Treaty. As of the publication date of this article, there are 153 PCT contracting states that follow the rules and standards enlisted under this treaty. Below is a map that broadly presents a rough idea of the geographical coverage of the member countries of PCT. The PCT contracting states are marked using blue colour in this map. 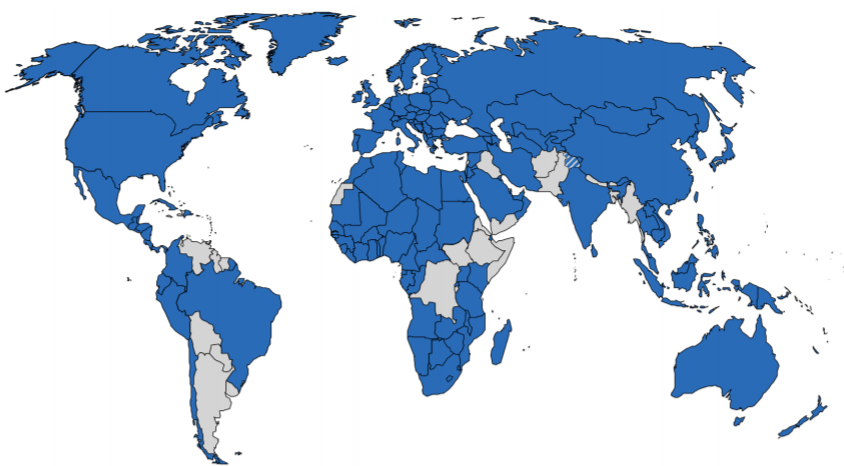 Secondly, the Patent Corporation Treaty (PCT) doesn’t provide you a single granted “International Patent” that protects your invention in all of the world’s 153 countries. Instead, PCT mode is just a simple, cost-effective & unified procedure of filing a single patent application internationally. The inventor needs to further proceed for national/regional phase filing to get patents granted in each country of interest individually.

At Intellect Bastion, we have a team of experts in multi-disciplinary domains who have successfully helped many clients in getting international patent protection for their invention(s). If you are an Inventor/startup/Academician and despite reading this article, you have certain doubts left in your mind in relation to your invention, then the Intellect Bastion team can assist you by answering any questions you might have and can even help you protect your invention nationally or internationally. Just drop your query on our Contact Us page or “connect” with us at +91 9977007307.

Inventors can also visit our website www.intellectbastion.com to know the list of services and solutions we provide to simplify their innovation cycle, help in protection, enforcement as well as commercialization of their patented inventions.

I personally invite you to join our social media pages listed below to keep yourself up-to-date with the latest updates in the field of intellectual Property Rights.

Why Should I Obtain a Patent?

What are the issues involved in Patenting?

Process to Patent an idea